Well well well. Where to begin? Neon Genesis Evangelion is one of my all time favorite anime. Introduced to me by an old friend around my 9th/10th grade school year, early 2000’s. By the late 2000’s through the next decade and some change I pretty much abandoned anime, comics, manga and video games. I had a huge vice, and it was getting the best of me.
.
Recently I’ve conquered that vice and as a wonderful result the ole “ball and chain” and I began spending more quality time. Hours amongst hours of watching Heroes of Cosplay and Project Runway was a favorite pass time. Then one evening while tentatively hawk eyeing scantly clad cosplayers, I popped a squat and hatched the idea of attending an anime convention. INgenius.
.
The ole ball and chain was so excited and overwhelmed with my squatting technique that she didn’t bother to question my intentions. Once calmed we googled conventions and happened upon Florida Anime Experience. It caught my attention more or less for its theme. It was an Evangelion theme and include voice actors from the original cast as well as new voice actors from the rebuild of the Evangelion series.

Previously we bought a vest form the Salvation Army and modded it with the theme of Evangelion. The idea was, there is slim pickings for anime related attire. Especially the ones I want. Which poses to be problematic. Either etsy, ebay, mom and pops shops I couldn’t find what I wanted/needed. 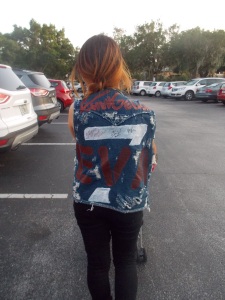 MONTHS cruised by and our oppurtunity to further reinvent our passion for anime arrived. The initial plan (if you read Californication Vol:2 you know how well we execute plans) was to attend all 3 days and maybe stay at the hotel and enjoy Orlando. Push came to shove and instead of 3 days we had a few hours in 1 day, Saturday. Long story short, Mayweather vs Pacquaio being next weekend and the expenses from Californication sorta Johnny Cage shadow kicked those plans into an abrupt fatality. Flawless Victory.
Resilience being our best character, we adapted and greatly enjoyed our time. The people were awesome, and courteous. We weaved through traffic like Initial D drifting down hill. The age range was mixed from young to older lol. I met the voice actor for Asuka Langley Soryu, The Second Child, my favorite character in the anime, Tiffany Grant. We shared matching backpacks. We are probably the only two people in Florida with those EVA Unit 2 backpacks. She was excited and yet so chill. I could definitely understand her prowess as a voice actor/actress. Being my first time meeting a voice actor, and a star, I was shy. I kept thinking of scenes from the series and how I had a huge crush on her character. Yes, a boy crush on an anime character, sue me. Late bloomer my ass.
We missed Spike Spencer…the voice actor for Shinji Ikari. I didn’t mind too much because at the end of the series I grew to hate Shinji. I don’t hate Spike Spencer, but Shinji’s whiny lil’ bitch ass can eat a d*ck. The boy needed to grow a pair of balls and get wet. Unfortunately he was too busy wanking off while complaining about being useless. Yea of course you will be useless spilling all your baby juices into the palm of your hand. And yes Shinji you are f*ed up. Well I guess Shinji and I had more in common than I care to mention. Pause. Shinji is the porcupine in the hedgehog’s dilemma. Being a black male with anime character crushes I felt similiar when going through high school. That might be why I hated him so much. Nah watch the series and you’ll hate him too, panzee.
.
Trina Nishimura was dope. She is the voice of Mikasa from Attack on Titan and Mari Makinami from the Evangelion Rebuild. She loved our girls and was very nice to take multiple photos even though the line was waiting. Charlotte loved every bit of attention she received while Ace and Kai, not so much. Ace tried to stealNishimura’s necklace, my little bandit. Lastly we met Brina Palencia who voices Rei Ayanami. By this time the girls were tapping out and Charlotte was hugging a Staff member in tears. Why? Because she can.

Kawiii The line was extra long so it was rushed and I screwed up the picture…fail. I had a brain fart.
We received many compliments on the vest and got three autographs. Awesome, almost as awesome as my old lady who put in hours ripping and designing that piece. She really made it her own as well as the jeans. I wish we could have really spent more time to explore, converse, game, listen to seminars and what not at the convention. Time was tooo short. Kinda like Disney when you are hopping to get character autographs. It was also difficult with three minions at the heels but great to have the family together. I was told, “One day they will know how cool a dad they have.” atlas, I doubt it.
.

I didn’t know what to expect out of Florida Anime Experience, FAE, since it was a first for me. My expectations were neither high or low, I was just enjoying the excitement of going and being there. I did expect to see a lot of Sailor moon costumes and merchandize. Perhaps, it’s my old age of 28 (lol) but I didn’t see as much of that as I expected. I saw a lot of Black Butler themes (I knew this because of Netflix, thank you Netflix), Evangelion, and a WHOLE bunch that I was clueless about but appreciated.

It was refreshing to see this new generation of anime. It made me curious and more open to checking them out myself. Apparently, since I’ve had kids, my list of anime knowledge has dwindled. Not that it was anything to boast about in the past. 😛 I was that girl watching Peach Girl, Marmalade Boy, and Sailor moon, and recently Full Metal (I went as the Full Metal Alchemist).

It was exciting to see my husband’s reaction when Tiffany Grant signed the vest we worked so hard on, and their matching backpacks. In my excitement, I forgot to take a picture, but she was gracious enough to allow us to take one with her.

In addition to all of the positives, the people were very welcoming and nice (especially to my toddler daughters.) I was amazed by the quality of some of the wardrobe people had on to depict their character. The hard work and imagination that went into it was phenomenal. When asked, they were more than gracious and willing to take pictures. Some went as far as to take pictures with my kids, and YOU KNOW how toddlers can sometimes be slow to getting into position to take that quick snap. I just want to thank those, if they find themselves on my page, for being so sweet, sharing their beautiful work, and allowing me to share and take their picture with you guys. I hope you guys appreciate it as much as I did. 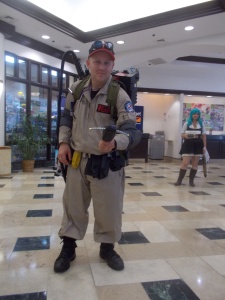 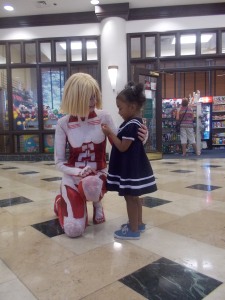 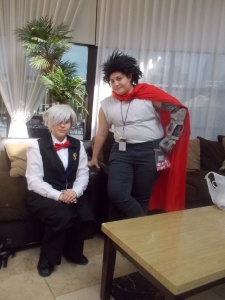 All in all, it was well worth it. Although, next year I think I’ll try to get my family to do something that was coordinated and themed. 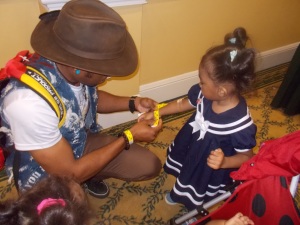